Pivoting Into Tech: Advice From an Award-Winning Sales Leader 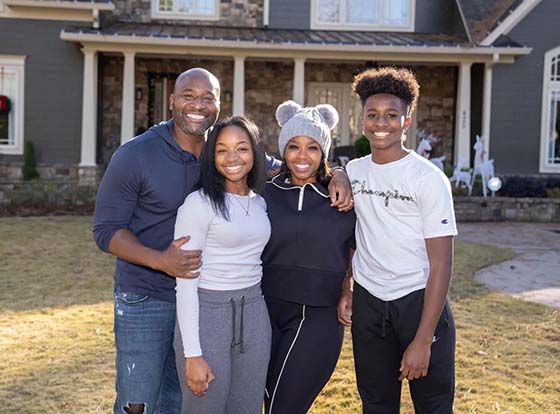 Throughout his career journey, from account executive to head of sales for Slack’s Communications, Media & Technology business in North America, Reggie Marable has learned a thing or two about pivoting into tech sales and effective leadership. What’s more, he has a heart for mentorship and is passionate about lifting others up as he progresses.

Personally, Reggie has mentored over 200 people during his 5 years at Salesforce and been instrumental in pioneering partnerships and programs to get more underrepresented talent in the door and help them feel supported. In celebration of his outstanding contributions, he recently received the prestigious Sales Diversity Champion Award from the National Sales Network.

Here are some of the invaluable lessons Reggie has learned from his long and successful career in sales, leadership, and service.

After graduating from Morehouse College in Atlanta, GA, Reggie knew he’d regret not giving his dream of playing professional football an honest effort. So, he joined the Canadian Football League in the hopes of eventually transitioning to the NFL. After a year, he hung up what he calls the “pipe dream” and set his sights on a more attainable one: building a career in sales.

Reggie began his ascent up the sales ladder as a customer service representative for a telecommunications company. After trying a few roles on for size, he found that career advancement opportunities for people of color at that company were through sales.

It all boiled down to whether or not he could produce results. Quoting Jay-Z, Reggie gave it to us straight: “Men lie, women lie, numbers don’t. Sales is very objective and I felt I would be good at it.”

Spoiler alert: he was great at it. But not without his fair share of struggle, which inspired him to write the book “The Blue Print — The Keys to Making BIG Money in Professional Sales.” “When I went into sales, I was a solutions engineer and then I went into direct sales. I didn’t work for a company like Salesforce that does training and enablement and teaches you the sales process — I got no training and no accounts. I got the phone book and a ‘good luck.’ So my first year, I struggled and had no idea what I was doing.”

Reggie remembers the difficulty of that time in his life and never wants anyone to experience the same. So he spent a year laying out “The Blue Print,” a proven strategy to help anyone succeed in outside sales. “Knowing that it’s helping people be successful, that’s rewarding to me.”

After 12 years in telecommunications and a brief stint in media sales, Reggie made the jump to tech and joined Salesforce in 2016 as a first-line sales leader — a transition he says wasn’t hard with the right approach. “I had to reinvent myself,” he says. “I came in with a beginner’s mindset and a servant leadership attitude and my career accelerated.” Reggie was on the fast-track, moving from regional vice president to area vice president. He’s now the Head of Sales for Slack, a Salesforce company.

At Salesforce, sales professionals can tap into our organization’s best-in-class, skills-based training and customer-centric approach to accelerate their career — all while helping companies with their digital transformations. Interested in getting your own start in tech sales? Reggie gives some practical steps for anyone eager to transition into this exciting field:

Reinvent yourself
Educate yourself on the industry and company you want to join. Reggie explains how he did his homework on Salesforce. “You have to get your ‘MBA’ in the tech industry. So I had to get my MBA in Salesforce, learning the Salesforce culture, the product portfolio, and the sales motion.”

Leverage your network
A referral can be a great way to get your foot in the door. Use your network to your advantage. “Go through your LinkedIn connections. You’re going to know someone who knows someone that works at Salesforce or Slack who can say ‘Hey, I vouch for this person. Give this person a look.’”

Put in the work
No amount of connections can take the place of hard work. A strong work ethic will always be a transferable skill. “With the willingness to hustle and grind and put in the work to learn the industry you’re in, I think it’s very easy to make a transition.”

Creating more seats at the table

Throughout his time at Salesforce, Reggie has made community service his priority, currently serving as executive sponsor for BOLDforce, our Employee Resource Group which stands for Black Organization for Leadership and Development. For Reggie, the work of BOLDforce means creating job access and opportunity for underrepresented communities.

“The tech industry truly does create financial freedom and generational wealth for people — and being in this industry, there’s not a lot of people of color. So as long as I’m here and have a platform, I’m going to try to help other people get into this company and be a part of this incredible industry. And BOLDforce is a way to do that.”

His passion for building a diverse talent pipeline has driven his involvement in many BOLDforce Atlanta initiatives, including partnering with local HBCUs (Historically Black Colleges and Universities). As an HBCU grad himself, Reggie knows firsthand about the untapped pool of incredibly talented and creative students these schools have to offer. “We started a pipeline program into the business development associate program at Salesforce where we’re hiring Morehouse and Spelman graduates. There are a few that have already progressed into business development representative roles, so now we’re creating a pipeline into Salesforce for diverse talent.”

But representation is only half the battle. Reggie wants to ensure Black employees are not only represented but fully supported through mentorship and sponsorship. Following the murders of George Floyd and Ahmaud Arbery, there was undeniably heightened attention on the Black experience — and for Reggie, the Black experience in corporate America. “What can we do to take all this energy and attention and do something with it?” he asked.

Reggie launched the Executive Mentorship Program for Black Employees where he matched over 200 senior leaders with individual contributors who desired extra help with navigating the workplace. Two years later, he’s still receiving testimonials on how the program fostered lasting friendships and helped open doors of opportunity within Salesforce.

With an impressive career marked by rapid growth and paying it forward, it may seem like Reggie was a hero from the start. But leaders are made, not born. He had to learn some hard lessons along the journey and how failure can be the greatest catalyst for success.

After winning multiple sales awards and receiving the highest recognition for leaders at his previous company, Reggie left telecommunications for a new opportunity in media sales where he would learn perhaps the greatest lesson in his career: how to fail forward and embrace servant leadership.

“My sole existence is to help other people be successful.” – Reggie Marable

Joining that new media sales team as an executive vice president, Reggie found there was more to leadership than producing results. “I was the smartest guy in the room, had a really big ego, and my listening skills weren’t where they needed to be. I wasn’t professionally mature enough to handle that role. Essentially, after my first year, I got fired from that job and I was unemployed for 6 months.” Taking time to reflect and reset, he discovered that failure is a humbling yet enriching experience. “I’ll quote Nelson Mandela: ‘I never lose, I either win or learn.’ I really had to embrace this.”

Reggie credits that moment of failure with teaching him what it means to be a true servant leader and making him into the leader he is today at Salesforce. “Servant leadership is the best way to go. I just had to learn to be open, to be honest, treat people with respect, listen more than talk. [Now] my sole existence is to help other people be successful … and when you put people first, you become successful.”

Prioritizing wellness with Success from Anywhere

With hundreds of lives positively impacted through his efforts, how does this award-winning sales leader, author, and mentor refill his own cup? By being intentional about wellness.

With Salesforce’s Success from Anywhere culture, Reggie finds that he’s better able to balance it all. When not traveling, he often works from home, enabling him to block out time for walks, morning workouts, and taking his kids to school.

He encourages everyone to take advantage of the flexibility Salesforce provides to prioritize wellness and invest in yourself.

“If you’re not mentally, physically, or spiritually in a good place, it shows up in work and relationships in a bad way. If you invest that [time] in yourself, you’ll be more productive and have better relationships.”

Ready to pivot into tech sales and thrive in Salesforce’s Success from Anywhere world? Join our Talent Community to stay connected and take part in the future of work!