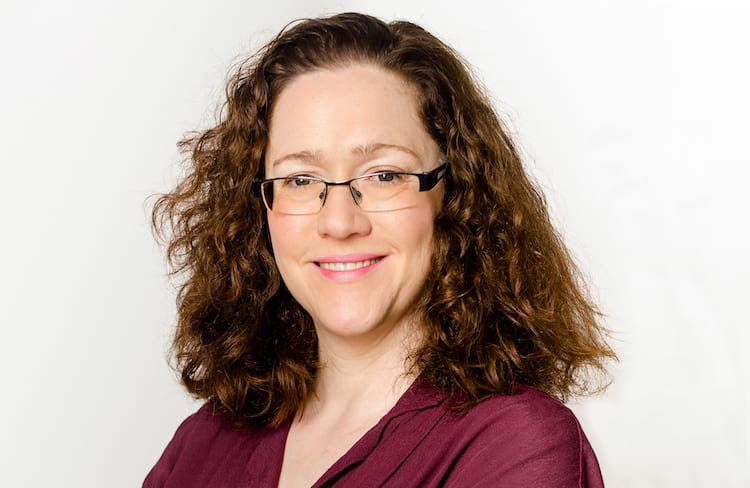 Growing up in a family of academics, a career in the corporate world seemed unlikely for Salesforce Technical Account Director, Sarah Andrews.

Raised in a family of librarians and college professors (several of Sarah’s family members, including her mother and sister, work in the field), she graduated from her Canadian university with a bachelor’s degree in computer science with plans to stay on for a master’s degree.

But while in school, she’d been working part-time for a Canadian company that was acquired by NYC-based Ziff Davis.

“I had the opportunity to move to Boston and work there. It was a chance to try something new and exciting. Even though all along I was thinking I’d probably end up in academia or research.”

A slight change of plans: a role with Customer Success Group (CSG) Canada

When she returned to Canada, Sarah’s primary focus was finding a part-time job with the flexibility to accommodate her life, which now included young children.

“When I was ready to resume work full time, I joined a consulting partner in Montreal working primarily with Salesforce. I liked the technology and the chance to learn a new system. Then I moved to another firm where I wore several hats: Salesforce architect, project manager, and consultant.”

Sarah liked consulting, from meeting customers to working with companies in a variety of businesses. When a former colleague with CSG Canada referred her to an open role on the team, she went for it — and landed the job after her second time applying.

“One of the things about Salesforce I really like is when someone refers a candidate for the team they’re on, it carries a lot of weight. I think I’ve made four referrals this year for my current technical account manager role. It’s a role I’m familiar with, so I know who’ll be good for it.”

Getting back to the technical

Sarah enjoyed her role as a success manager, learning about different businesses and seeing firsthand how customers were using Salesforce. The role also helped her orient herself within the company and become comfortable with its size, scope, and departmental organization. Nevertheless, she missed having more involvement on the technical side of the Salesforce platform.

“My background is quite technical and I missed that. My role was really focused on relationships, either at scale or one on one. I wanted to go deeper on the technical side.”

Sarah explored her options and talked with people inside the company to learn more about what was available. She discovered that a technical account manager (TAM) role, initially a position that functioned primarily on site at a customer’s location, was becoming primarily remote. So she checked it out. “It was just before the pandemic when I started pursuing it,” she recalls. “But the pandemic was in full swing when the deal closed.”

The TAM role lives inside the support organization and manages the customer’s relationship with Salesforce from a technical support standpoint.

“We make sure they’re getting attention to their support cases. And we do a lot of work on performance and optimization. How are they using the system? Are their other systems integrated? Do we see problems there? Are they looking to add new functionality or new users?”

Sarah is committed to helping her customer solve some of their toughest technical problems. In fact, she recently spent long hours with a customer to add a new feature to their products.

“An inefficient piece of code was calling into Salesforce and causing a significant performance issue. We had to ‘throttle’ their Salesforce instance until we figured out what the problem was. Throttling limits the amount of resources an application can access.”

Sarah sees her role as a bridge between the relationship focus of Customer Success and the transactional nature of Customer Support.

“We want cases closed, but we’ll also be there tomorrow and next week. So, for example, with the issue that required throttling, I’ll be the one following up with that customer.”

Most successful tech companies seek to make their customers feel valued in their customer success and technical support programs. And this requires a collaborative approach based on relationship building.

“I don’t know if it’s learned or a combination of nature-nurture, but it seems women take to this naturally. And relationship building is the direction that Salesforce is taking and the direction of technology in general.”

While acknowledging that technology is still, in large part, a boys club, Sarah sees Salesforce working to change that. “If you look at the engineering and research and development teams, they’re still male-dominated. But that’s changing; it doesn’t happen overnight. A lot of the change starts with how children are treated in school and what they’re encouraged to pursue.”

A relative of Sarah taught computer science at a community college for 40 years. They reminded Sarah that in the 1970s, the majority of their students were women. As technology became more popular and mainstream, it gradually morphed into a “nerdy” male-dominated field. In the 1980s and 1990s, the number of women in her relative’s classes dropped off dramatically.

“For a while, technology was something girls coming out of high school seemed really interested in. But so much of it is our preconceived notions of what’s fun or cool. I always found math, computers, and science fun. I was going to be a biologist, then a vet, until I stumbled into computer science. I think we have to remove those initial stigmas for girls. And provide more female role models.”

A culture of giving back

Volunteer time off (VTO) is a mainstay of Salesforce culture that Sarah was unaware of before joining the company.

Besides her continued volunteer work with the Scouts, Sarah has expanded her volunteering to pro bono technical projects for nonprofits. TAMs often work together as a team. They gather a few nonprofits and try to pick a project that can be done in a day by four or five people.

“This is good for the nonprofits and good for TAMs. They’re meeting other TAMS and learning how to work with them. There’s such a mix of people that become TAMs. Some have been consultants, some were success managers, some came from support, so the opportunity to work with people from a variety of backgrounds is really good.”

Life is a patchwork quilt

By her own measure, Sarah feels that since having kids she’s been surprisingly good at turning work off — even when working from home where the temptation is always there to check one more thing.

When asked what she does to relax and rejuvenate, she laughs and then replies, “You mean aside from sleeping? Sleeping is one of my favorite activities. I almost never work off-hours unless there’s an emergency. We live in the country, so it’s a beautiful place to walk and snowshoe in the winter.”

Though her newest hobby, which she took up five years ago, is patchwork quilting.

“Quilting is extremely slow and tedious sometimes. So, it really taught me to slow down and have faith that if I just keep going, I’ll get there. Eventually you do. Each step takes time and has a set of activities. It’s very meditative because quilting is so repetitive. And finally you step back, and you have a beautiful quilt.”

Sarah has also found that the organization and repetitive nature of quilting has seeped into how she plans and organizes her work at Salesforce.

“I scan my emails every morning looking for emergencies and then I check all the customer cases. So it’s tedious, but all of a sudden, there’s this one email where a customer has a problem. And if you weren’t doing that check, you’d miss it.”

When she’s asked what she recommends to those who are possibly interested in a Salesforce career, her advice is straight forward.

“I tell them to talk with as many people as possible, especially someone in the role or area they’re considering. Then I tell them to apply. It took me two tries to get here. Just start because once you do, you see how the process works. Remember, the answer to any unasked question is “no.” If you don’t try, you won’t get there.”

If, like Sarah, you’re ready for a new challenge, check out our open roles in Customer Success. Visit our careers site today to get started.